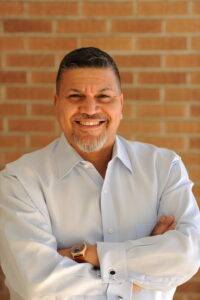 Rev. Dr. Gregory James Edwards is Founder and Senior Pastor of the Resurrected Life Community Church, United Church of Christ, and President and CEO of the Resurrected Com-munity Development Corporation. Under his leadership the church and community development corporation have experienced exponential growth, evidenced by membership, financial self-sufficiency, and ongoing employment creation.

His contextual approach to ministry–based upon an understanding of the intersectionality of race, spiritual growth, educational empowerment, economic self-sufficiency, and public policy–led to the creation of the Resurrected Life Children’s Academy, the Lehigh Valley Freedom School Partnership, and the James Lawson Freedom Schools; all initiatives of the Resurrected Community Development Corporation.

A frequent lecturer at colleges and universities, Dr. Edwards frequently presents to the faith-based, corporate and nonprofit sectors, and has been featured in TIME Magazine. As a professional musician, he specializes in Black Sacred Music, including Jazz. Dr. Edwards is Chief of Staff for POWER INTERFAITH, Pennsylvania’s largest multiracial, multi-faith community organizing initiative, and directs the work of the organization in the Lehigh Valley. Additionally, he serves as board chair for Promise Neighborhoods of the Lehigh Valley, and serves as a board member for PA Stands Up, the Community First Fund, and the Church Building and Loan Fund of the United Church of Christ.

During his 2016 trip to Liberia, West Africa, Dr. Edwards was enstooled as Chief by the National Council of Elders of the World-Wide Missions of Liberia, and the people of Grand Bassa. In 2016, Dr. Edwards was inducted into the inaugural class of the Martin Luther King, Jr. College of Pastoral Leadership at Morehouse College, for his exemplary leadership in advancing Martin Luther King’s Beloved Community through peace, truth, justice and nonviolent direct action. In 2017, during their Sesquicentennial celebration, Morehouse further honored Dr. Edwards, inducting him into the college’s prestigious Martin Luther King Jr. Board of Preachers.

As the first person of Black African Heritage to run for federal office in the Lehigh Valley of Pennsylvania, his historic candidacy for Congress in 2018, was covered by MSNBC, the New York Times, the Washington Post, the Atlantic, Guardian Magazine, NOW THIS, and a hosts of other media, and featured in the PBS documentary “Battleground.” In 2019 he was appointed Chair of the Lehigh County Democratic Black Caucus, and in 2020 he was appointed to the Pennsylvania Democratic State Committee.

A graduate of Geneva College (Bachelor of Science in Urban Ministry Leadership), the University of Delaware’s Graduate School of Public Policy and Urban Affairs (Certification in Com-munity Economic Development), Drew University (Master of Divinity), and the New Brunswick Theological Seminary (Doctor of Ministry in Prisons, Public Policy and Transformative Justice), Dr. Edwards has been awarded the NAACP Man of Vision Award, the Peace Pilgrim of the Year Award, the Community Development Award by the Allentown Human Relations Commission, the William Gray III Leadership Award, and the prize for Multi-Cultural Church Leadership from Drew University, where he simultaneously served as President of the Theological Student Association and the Black Ministerial Caucus.

Page load link
This site uses cookies, as explained in our privacy policy. If you agree to our use of cookies, please close this message and continue to use this site. Accept & Close
Go to Top